The Newports we're all used to seeing 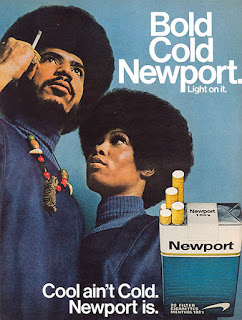 Might as well stick with the Newport theme for this week.

The other giveaway is this ad doesnt have the "Alive with pleasure!" slogan.  Aside from it not having the SG warning.

The bottom of the pack in this ad looks slightly different than the bottom of a modern FF Newport pack.  A modern pack basically says "CIGARETTES" on the bottom.

This ad looks neat with two Black people and their big afros.  Getting up close with someone you love and is smoking a wonderful Newport is a wonderful feeling.

"Newport is better-tasting than America's #1 menthol (at that time)" is the message I get from this ad.  I bet a Newport 100 back then was a lot stronger than a modern Newport.

In the 70's, Newport's way of getting more Afro-Americans to smoke is by going through urban towns in vans and pass out free Newport pack to Blacks.  FREE NEWPORTS?  Yeah, I barely remember some places passing out free packs of various brands on planes, and at certain auto racing/horse racing events.

I heard some Black kids in the 70s actually stole packs outta the vans...which was the main reason Lorillard discontinued passing out free Newport packs to Black communities in those days.  Of course, back then, kids as young as 5 years old could walk into a store and buy a pack (or buy a pack from a vending machine) with no issues from the workers at all.

Free packs on planes wouldnt work in modern times.  Even if smoking on a plane was still allowed.  Since I could see a lotta people on the plane stealing the packs when they attempt to get off after the plane lands.

People stealing packs in stores in the 70s-80s wouldve been a joke.  Since cigs were a lot more affordable for everyone (and not to mention you couldve bought em anywhere when I count cig vending machines).  A Newport van in modern times would get hijacked.  Since a van with tons of Newport packs is like having a van loaded with cash inside driving thru a Black community.  I wouldnt be surprised if the loose Newports sold in the streets come from stolen packs. .
Posted by Jason T at 1:17 PM No comments:

Newport smokes fresher (than any other menthol cig)! 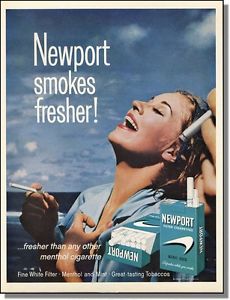 Some people call Newports a "Black cig."  Since its true Newports are the ONLY CIGS I see Blacs smoking at all.  Been more than 10 years since I saw a Black person outside with a pack of Kools, Salems, and even B&H Menthols.

One sista told me once "I cant smoke a cig with a white filter."

Well, let's go back to 52 years ago, when Newports had a totally different look.  Would a Black smoker in the 60s be tempted to smoke the original Newports?  After all, African-Americans (believe it or not) represented the majority of US adult smokers during the 60's.

I wouldnt mind trying an all-white Newports from half of a century ago.  I have a feeling even with em having tons of nic in em 50+ years ago, the original Newports had a much minter taste than the Newports I'm used to smoking.

I wouldnt be surprised if more Blacks in that era smoked Kools than Newports and Salems.  For one thing, this ad doesnt target the Black audience.  This ad certainly targets a man who loves seeing ladies smoking all-white cigs.  And a man who gets turned on at seeing a lit cig up-close.  Too bad you cant see the cherry end being "Alive with pleasure" as well.  Since the up-close cig (on the right side) would look better in the dark.

You can see the water in the background.  A lotta menthol ads in the 60s and 70s had the waterfall/beach theme   Since menthols are cigs that "taste fresher," "feel fresher when you inhale/exhale," and "freshens your breath," that meant smoking menthols felt just about as "KOOL" as seeing people smoke in the fresh water at the beach.   Or just about as "KOOL" as seeing a waterfall.  And the waterfall is refreshing to see in itself.

Beach/waterfall images in Winston ads or Cambridge ads wouldnt work since those are regular cigs.  And regulars dont have the refreshing taste and feel.  Therefore, there's no connection between a rich tasting regular and a refreshing-looking beach image.  (Cambridge is one of those now-defunct brands.)

Note:  Menthols actually used to be marketed as a cig which can "freshen your breath/soothe your sore throat" when you smoke em.  Albeit Kools were the ONLY menthols before 1950.   The Newports and Salems didnt hit the market til '58.
Posted by Jason T at 6:00 PM No comments: 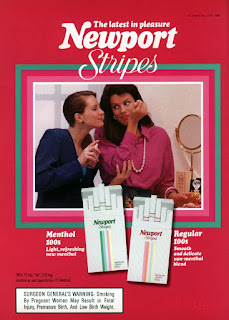 I tried the non-menthol Newport Stripes once in my early 20s.  They had a cinnamoney-like taste....kinda similar to the taste of the Newport Reds (the NON-menthol Newports).

I believe Newport Stripes first came out in '87 or '88.  Since I remember seeing them on an outdoor billboard around that same time.  The ad is in a nice, dark pink color.  This is the Stripes ad with the prettiest women as well (at least among the ones I saw on the net).
.
The best part about this former brand is the cigs were all-whites.  Making them one of only two all-white Newport brands.  Newport 120s were all-whites too.  And both of those all-white Newports are no longer in existence.
Posted by Jason T at 6:33 PM No comments: