Ernie Banks in a Marlboro ad 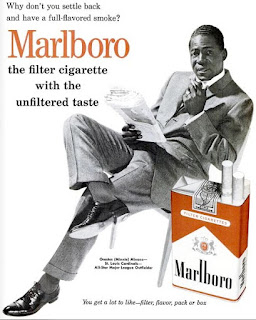 For cig ads in the VERY old days (pre-1960), it was just about as normal to see sport athletes smoking Marlboros, Kents, or Camels.  Just like it was normal to see Fred and Wilma smoking Winstons in tv commercials during the 60s (when the Flintstones actually used to be on the air as the first-ever primetime cartoon).

This Marlboro ad has Ernie Banks (aka: Mr. Cub).  Ernie was the first Black player in Cub history,.  His playing career began with em in the 50s, the same decade this ad is from.  Ernie passed away earlier this year.

It wouldve been funny to see guys like Michael Jordan and Magic Johnson in cig ads during the 80s.  And I'm sure even then, antismoking groups (like the American Cancer Society) wouldve been b***hing about sport stars in cig ads.  Just like when they were whining about seeing Joe Camel in the late 80s-mid 90s Camel ads.
Posted by Jason T at 6:33 PM