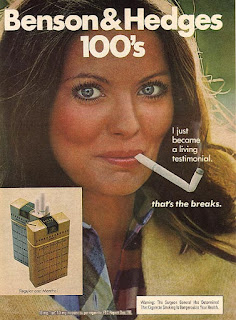 The "America's favorite cig break" BH campaign from the 70s was actually funny.  BH are actually the first-ever 100s to come out (which was actually in the 60s.....since the 60s had BH commercials on TV as well).

I'm sure BHs were a lot mo stronger in the 70s than in the late 90s-mid 2000s when I used to smoke BH menthols from time to time.  I've smoked the BH Golds before as well.

Both flavors had a better taste to me before '06.  Even BH Menthols had a better menthol taste back then.  They were like an all-white Newport to me taste-wise when I first smoked em.

BH Menthols are all right now.  But I wouldnt call em an alternative to Newports.  But if I want an all-white baby in my mouth, BHs would be my first choice in that regard.  Yeah, they're mo expensive than Newports AND Marlboros.  But with their smooth taste, BHs are the best all-white cigs out there (BHs are corked cigs in the UK I believe).

I'd rather smoke a BH Gold to be honest for a regular compared to Marlboros in modern times.  BH Golds taste mo like a stronger version of a Marlboro Light.
Posted by Jason T at 4:24 PM