Want a modern-era Marlboro Ad with a lady? 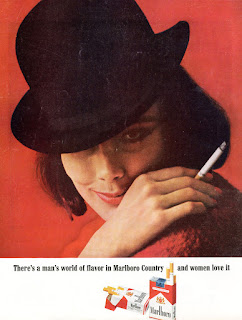 I read this ad is from 1973.  Well if this Marlboro Reds ad is from the 70s indeed, it couldnt have been published in the USA.  Otherwise, you would see the SG warning.  The ignorable SG warning started appearing in USA cig ads in '71.  The same year when cig commercials got banned on raadio and TV within the USA.  (Some countries actually didnt start banning cig commercials on tv and the radio til the late 90s/early 2000s)

Its actually neat to see a lady in a Marlboro ad.  One week, I'll have to post a Marlboro ad from the 30s/40s.  When PM used to market Marlboros as a women's bramd.  Before the Marlboro Man and "Welcome to Marlboro Country," Marlboro was a "Mild as May" cig for ladies in the pre-1950s era.

Enjoy this ad if you're a smoking fetisher like me.  Cause good luck in finding another Marlboro ad  from the 2nd half of the 20th century, which features a lady.
Posted by Jason T at 3:29 AM