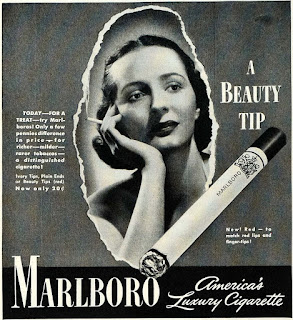 Here's one Marlboro ad before the Marlboro Man days.

I remember hearing about how the end of non-filtered Marlboros used to be red to match the red lipstick on ladies' mouths.  I wish I heard of a filtered brand that had red filters.

I'm guessing this is a Marlboro ad from the 40s.  When ALL cig brands were nonfilters.  Filtered brands became mo common in the late 50s.

Notice how the original Marlboro pack looks much different than the Marlboro pack we're all used to seeing in the 21st century?  I'm guessing the lady in the ad is a redhead herself.

I'm sorry, I was thinking of a different Marlboro ad from the 40s I was looking at.  Don't worry.  I will actually post an ad later on, with the actual Marlboro pack from the NF era (NF = Nonfilter) .

The cig itself obviously looks different than the Marlboro cig in the modern era.
Posted by Jason T at 6:45 PM