Kools used to be a good Newport alternative 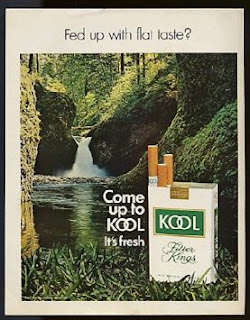 A lotta Kool ads in the 60s-mid 70s had the waterfall theme  i think the Kool ads from the 80s and 90s looked a lot better than this one.  But I understand the connection between a waterfall and a "refreshing menthol cig."   Seeing the waterfall is "refreshing" in itself.

The Kool Mild ads from my boy days had women in em.  I've actually seen Black women in some 70s Kool ads before.   If I lived in the 60s/early 70s, I would love to try a Kool pack from that era.  Since Kools used to be the #1 menthol back then.

I do remember trying Kools a few times in the late 90s, before RJR bought the brand.  The original Kools tasted a lot like Newports....strong tasting cig with more tobacco flavor and a touch of mint flavor.

The RJR version of Kools in modern times taste more like a corked Salem....they have a lot more of the menthol taste than tobacco now.  Even the original Kool pack looks better to me than the modern pack.