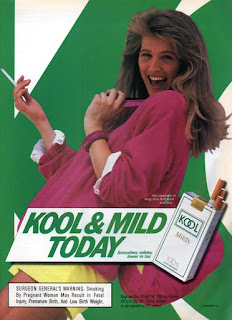 I remember seeing Kool Milds ads on the back covers of some magazines.  Women AND men appeared in em.

I recall seein a few young ladies in my college days with Kool Mild packs.  One of em even offered me one.  But I made the mistake of telling her "No thanks.  I got my own but they're Newports."

(If she had a Marlboro Light or a ML menthol, I wouldve accepted her offer then.)

Since I never tried Kool Mids on my own, I have no comment as far as their taste is concerned.  i'm guessing they're more like Kool LIGHTS in reality based on their name.

The lady herself in the above ad looks a lot more "KOOL and sexy" than the pack.
Posted by Jason T at 3:50 PM