A rare Winston ad with a lady 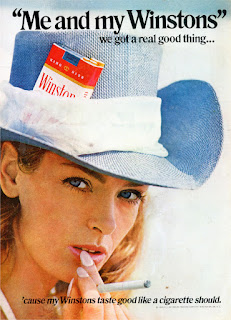 Seeing a lady in modern times keep her pack on top of her head would be VERY rare in modern times.  These are the classical Winstons.  The same ones which used to be popular among smokers til Marlboro became the new #1 regular brand by the mid-70s.  Even then, Winstons were still a popular brand til I'm guessing the late 90s?  When RJR started making the additive-free Winstons?

I actually dunno if I'd try a pack of Winstons from the 60s or 70s.  I'd rather try Marlboros instead.

I tried the modern Winstons before...the FF Winstons tasted harsh while Winston Lights actually have a smoother feeling.  I wouldnt mind trying a pack of Winston MENTHOLS from that era though.

Winston tastes good like a cig should? A modern FF Winston HARDLY tastes good! Smokers in those days actually enjoyed Winstons and Salems a lot til RJR changed the taste of both of em by the late 90s.
Posted by Jason T at 3:02 AM