A classical Kool ad with lady riding the pack 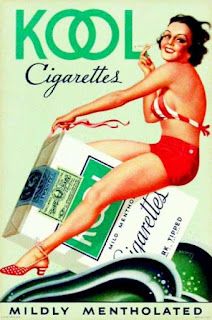 I dont really get the message of  "Smoking cigs is KOOL" from seeing this very old ad.  But the lady certainly looks "KOOL" riding the pack.  I'm actually pretending the pack she's riding is more like her driving a motorcycle.  I guess based on how the ad is made, she is actually riding on a boat figuratively at a beach with green, menthol water.  (The Kool pack is her "boat."  I dont think she's surfing.)

This must be an ad from the 30s and 40s.  When all cig brands were nonfilters and  Kool was the ONLY menthol on the market in that era.  The corked tip on NF Kools looks neat...gives you an idea on which end of the cig to put into your mouth. lol

More menthol brands didnt start appearing til the late 50s.  When BT started making cigs with filters To make smokers feel better at smoking without having to worry about getting tobacco in their mouths.  And without having to worry about getting cancer at all....the first claims of smoking causing lung cancer started appearing in the mid 40s I believe.  The filtered Kools were introduced in '56 and they were portrayed as safer cigs to smoke (than NFs) during that era.

Of course, back then, it wasnt exactly proven smoking can cause cancer at all.  I do remember reading about a wife trying to sue RJR in court in the 50s after her husband died from lung cancer.  She was convinced him smoking Camels for years caused him to die.  But she lost her case.

If this happened in the late 90s or afterwards, she wouldve WON her case then.  Since everyone in the 50s socially accepted smoking, and nobody thought cigs were really bad for their health.  Til the SG started appearin with his '64 report on the cons of smoking and cigs.  And then when smokers started getting scared of the smoking cons, BT invented the light/ultra light brands as a way to prevent people from quitting smoking, making smokers think light/ULs are "safer cigs" to smoke than hi tar/hi nic cigs.

The light/UL cigs were the NEW "safer cigs to smoke" in the 70s era,  The truth is BT invented filtered cigs in the 50s and then the lights/ULs 2 decades later as two ways to make  millions of adults (and teens) to keep buying their products.  After all if everyone stopped smoking when all brands were NFs alone, BT wouldve went outta business (And we wouldnt have cigs at all by now).  Gotta some up with some ideas to keep people buying cigs and to (more importantly) keep making money off of their pack/carton purchases!

Nothing is really "safer" for your health in this world.  Not just filtered/light/ULcigs.  Diet pop really aint safer to drink than sugary pop.

I dunno if I'd smoke a NF Kool.  Those nonfiltered cigs even look smaller than king sized filtered cigs.  I'm used to holding long cigs.  Not cigs that look more like white toothpicks or fatter joints.
Posted by Jason T at 11:58 AM