Switch to Salem? If we talking about classical Salems, maybe 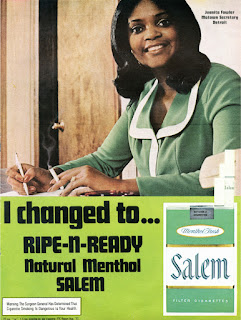 The Black lady in this Salem ad looks nice.  But she would look better with a green dress on instead.  Its nice to see her holding an actual lit Salem in her hand.  At least she's coordinated with the green in the pack.

This is from the 70s when BT focused on targeting African-Americans more in their menthol brand ads.  Most Black smokers even today prefer menthols. But Salems wouldnt be their first choice....maybe back in the ol days.  But not in the 21st century.

As a matter of fact, Salem was the second  most-popular menthol in that decade.  With Kools being #1 of course.

Would this ad tempt me to smoke a Salem?  Well, not a MODERN Salem, that's for sure!  I will admit the Salem Spirit 80s ads look more appealing than this one.

I wish I could go back in time and try the Salems shown in this ad.  Since I heard Salems tasted much better before 1988, when RJR changed the Salem pack design.

When the pack changed again in the very late 90s, that's when I actually tried some Salems for myself....those menthols tasted gross! No tobacco flavor at all!  Even more mint taste than a Benson and Hedges Menthol!