Meet the Marlboro Man, the guy who defines smoking and cigs 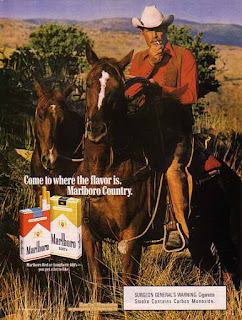 I'm sure any readers born in the 20th century are very famiiar with the Marlboro Man.  He's the one who defined Marlboros AND cigs in general during my lifetime.

When I think of smoking, "Marlboro" is the first brand to come to my mind.  I'd be surprised if there's a person who's been smoking longer than me and has NEVER smoked a single Marlboro cig of ANY kind in his/her life as a smoker.

Marlboro Lights (not pictured in this ad) were the most common cigs I saw in high school and especially college.  Seemed like almost all of the non-menthol ladies at my college had the Marlboro Lights.  With the occasional Marlboro MENTHOL Lights ladies.

Even my own mother smoked Marlboro Lights 100s herself in my boy days.  She was a rare African-American smoker who hated menthols.  Although she smoked a Newport or a Benson and Hedges Menthol Light from time to time within the last 3 years of her life.

I never tried the Marlboro Mediums and the Marlboro Blacks.  I think the ML menthols taste better than the FF Marlboro Menthols.  The FF menthols are weaker than a Newport and weaker than even a Kool from the late 90s (before RJR bought Kools).  I'd have to stop smoking for 10 years before I pick up a Marlboro FF Menthol.  Otherwise, no FF menthol can beat a Newport.

But whether you smoke Marlboros or not, or even if you're a non-smoker, you gotta admit the Marlboro Man is the #1 icon in the world of smoking.
Posted by Jason T at 3:46 PM