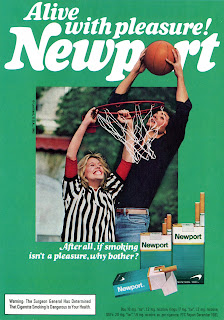 The Stanford University site with 1000s of cig ads has this Newport ad under the "Targeting Teens" category.  Looks like a Newport ad from the early-mid 80s.  This is a rare early-mid 80s ad with the ad model(s) not even holding an unlit cig.

A man and his woman is playing basketball in the ad.  Last time I checked, adults play basketball too.  Not just teens.   So I wouldnt call this an ad targeting teens.  The ad is making it look like if you smoke, you can have fun playing any sport you want.  And you CAN smoke and still play street basketball for sure.  I've seen basketballers smoking Newports before several times.  And I dont mean NBA guys.  Most NBA guys actually smoke weed.  And they prefer cigars for tobacco smoking.