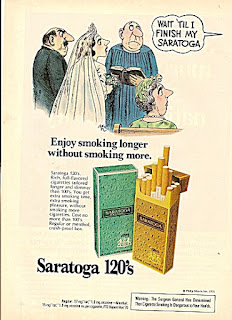 Overall, I think having a lady holding a Saratoga in her hand or mouth would be more glamorous than having cartoon characters.  Unless PM's intention was to make Saratogas look attractive to teens during the 70s era.

PM = Philip Morris, the same makers of Marlboro and Benson and Hedges.

I bet a few teen girls actually smoked 120s even 40 years ago.  But I cant see a new teen girl smoker saying "Maybe I'll start smoking by buying a Saratoga pack."     I guess PM didnt wanna use ladies in their Saratoga ads because there would be no connection with ladies and corked cigs.  Especially a corked 120.  Ladies would've connected more with the all-white 120s called Max and Eve.  Since an all-white 120 would look prettier than a corked 120 in my opinion.

I cant confirm if Saratogas are still available right now.  Since I never asked for a Saratoga pack in the FSC era.
Posted by Jason T at 1:58 PM