A TWO-page Merit Cigarettes Ad from '94 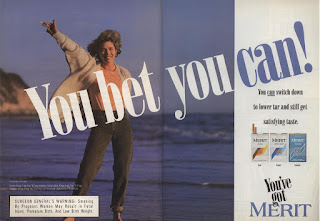 When BT got banned from having commercials on tv and the radio (which went into effect on Jan 2, '71), they didnt like the ban at first.  But they realized they can spend more money on cig ads in magazines and outdoor billboards.

2-page cig ads were more common for me to see in the 80s/early 90s.  Most of the 2-page ads I saw dealt with Marlboro, Salem, Newport, and Camel.  Maybe Kool had some 2-page ads too.

But here's a 2-page ad from a PM-based brand I remember hearing of and seeing in the past.  Merit.  Another one of those low tar/low nic brands.  PM even had an "Ultima" verion of Merit  Which was likely introduced to compete with Carlton and Now.  Two brands (at the time) which were both just as low in tar/nic as the Merit Ultimas.
Posted by Jason T at 6:15 PM