A bonus Eve ad for this week 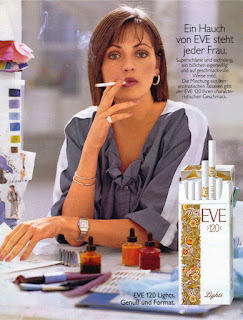 I don't know the country this Eve ad is from.  But seeing this babe take a drag on her Eve caught my attention.  Seeing cig ad models hold lit cigs is nice.  But I dont even remember seeing ladies take actual drags in the USA cig ads before.

Eve was one of those 120's brands which first came out in the 70s.  A cute woman actually savoring her cig in this ad makes the other Eve ads I've seen look dull.  Especially since the Eve ads I remember seeing only had the packs in em.

I believe I was a lil kid when Salem Slim Lights 120s were still on the market in the early-mid 80s. Since I have seen those 120s in Salem Spirit ads from that decade.

And I never saw Max and Saratoga for the first time in my life til I got on the net in the late 90s.    Even when they were available, Max/Saratoga were still hard to find in general.
Posted by Jason T at 4:55 AM