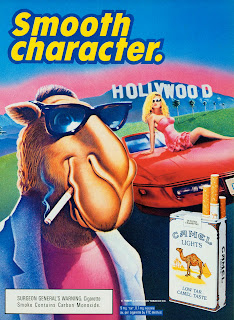 How you doing, Joe?  Joe WAS a "Smooth character" in Camel ads during the late 80s-mid 90s.  I read once Camel sales among teens particularly went up with Joe Camel in the ads.

This is one Joe Camel ad which includes a woman.  Maybe if SHE had the cig instead of him, then the ad would look more alluring to me.

Antis claim RJR was targeting kids in their Joe Camel ads.  That's why RJR was forced to ban Joe from their ads in 1997 (I believe that was the year).  This ad looks more attracting for an adult than a kid in my opinion.  Would a kid really be tempted to try smoking a Camel after seeing a sexy lady on a pretty red car?  The sex image may "sell" to a man.  But not to a 10 year old boy.

Maybe it IS true cig ads motivated teens to start smoking.  Especially since there was an increase of Camel smokers among teens during the early 90s particularly.  But in my opinion, it wouldnt matter if Joe had a Camel, a Kool, or even a ML in his mouth.  I'm not gonna buy a pack of Camels just because I saw a cartoon character in it.  What I care about is how the actual cig TASTES.  Not how cartoonish RJR made their Joe Camel ads look.

The older Camel ads ("Camel: Where a man belongs."  "I'd walk a mile to smoke a Camel") lacked a lotta glamour in general.  The "best" Camel ads to me are the ones from the pre-1960s era.  When RJR made Camels sound like smoking em was actually GOOD for your health.  Especially if you had a cold or a sore throat.
Posted by Jason T at 8:45 PM